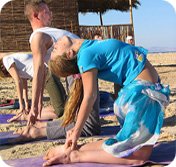 In common people’s minds, the Yoga word is associated with a freak guy who passes unscathed through fire and flood, who sleeps on nails, eats nothing but nails, and besides stands on his head for unknown purpose. He’s in general a broad specialist in magic and wizardry. However, it’s incomprehensible whether he is totally crazy or he knows something that nobody else knows, not wanting to disclose it to anyone.

In any case, Yoga looks very strange and out-of-life at all.

Let’s step aside from such opinions and approach the essence of the issue.

Hatha Yoga is a very old system of all-round personal evolution, based on revelation and development of potential abilities of a human body, human energetic structure and mind. The aim of this practicing technology is person’s spiritual and intellectual evolution. From time immemorial, people wanted same thing they want nowadays and will always want, namely – happiness! Being happy and bringing happiness to the others are a basis of all and any human aspirations and actions. And death is what people fear and want to avoid! Mankind has always been seeking happiness and immortality. Yoga is one of the ways to find both. The first step on this way is health, both physical and mental. The next step is accumulation of original force – the constructive energy which may be used for any creative manifestations of a person and for personal development. Further, there are practices aimed at qualitative transformation of consciousness.

Despite the fact that Yoga history is over five millenniums long, Yoga has not only preserved its actuality for the mankind, but has become even more topical at present. Yoga practices and methods were being perfected over many centuries. Only the most effective and safe ones remained. Yoga arrived at this date as an integral training system including sufficient set of techniques of body and breathing operation which enable a person to effectively accumulate ample quantities of natural energy, аs well as of mind-developing practices allowing to control the accumulated energy fully and to use it rationally.

We all live in a very interesting time. Life changes every day, every hour. And a person needs to satisfy more and more new requirements, being forced to process huge volumes of information and to endure the further tougher competition. And, while a hundred years ago people said “The strongest one wins” when they meant advantage in physical strength, now “wins” the one who’s more adapted to social environment, i.e. a person with greater constructive energy and innovative ideas, having good health, cheerful mood, stable psyche and clear mind. And so, Yoga is one of the adaptation systems and technologies of human development which, as experience shows, is not the worst, if not to say the best. I don’t think it is right for everybody, for there are as many individual ways of personal development as there are people. Not even everyone wants to evolve at all, although the reality does not give a choice because the World is too interested in human evolution.

Upon the whole, Yoga is for those who do not want to spend their lives in vain, for those who are ready to make another step forward in their personal evolution. It’s not an easy way, and life does not become easier thanks to it; it does become more interesting, more vivid and intense, but not easier. For, as a matter of fact, only one thing changes – the attitude to Life, to reality in which you’re living. You gradually transform from a victim or a pawn into a player at the Life game table. When you win, you make another step forward in your personal evolution; when you lose, you gain new experience. You should only remember that the further you turn into a player, the more responsibility you bear for your life, your actions and your thoughts. The victim’s position is a very comfortable one when a person may blame anyone and anything (people, circumstances, weather) for his or her misfortune, and may pity himself or herself. However, if you’re an experienced player, you are aware that there’s nothing to blame except for your own imperfection which is actually just what you hunt after when you play such games. And, if a player wins, he or she is not attached to the result because he or she does not seriously take neither the game, nor the prize, nor even himself or herself. For if you take the game (i.e. life) too seriously, you stop getting pleasure from the process, and the ability to be whole-heartedly pleased is exactly the main feature distinguishing a living player from a dead one.

Now, more on the methods used in Yoga.

According to Yoga Sutras of Patanjali, Yoga consists of eight “limbs” or parts. We are now interested in the first four: Yama – the principles of interaction with the external World, Niyama – the principles of interaction with oneself or one’s inner space, Asana – body shape or posture in space, Pranayama – control of breathing or respiratory exercises.

Asanas are postures or body positions in space which fluently spill over one into another and merge into asana sequences formed up in such way so as to achieve the most favorable effect upon organs and systems of a human body, while harmonization of consciousness is their eventual outcome. Influence upon consciousness is taking place indirectly, through a person’s energetic structure.

Pranayama is a practice of breathing control allowing a person to purify energetic channels of the subtle body, to accumulate ample quantity of natural energy and, above all, to learn to distribute the energy deliberately inside the energetic structure and to utilize it at one’s own discretion.